Albert (Al) Grudzinskas,  is often described as a "Great Guy". It is a perfect, suitable description of his character, based on all he has done for so many during his life, specifically as a soccer coach. On Saturday September 15th, 2018 our soccer community and the Zalgiris Soccer Family suffered a major loss with his passing that day.

Zalgiris Soccer based out of Central MA, was founded and created by the great Al Grudzinskas.
During the early 1990's when soccer had not reached its currently popularity at the youth level, many  players such as myself, were benefactors of Al Grudzinskas' generosity, passion for people, and the love of soccer. 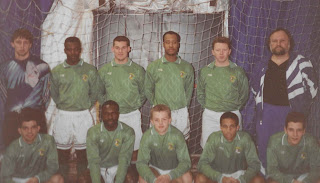 Al used his own money to register teams, purchase uniforms, and provided rides for any player who needed it.  Putting this in perspective, his new Mazda MPV had over 267,000 miles at one point, mostly from picking up his players, driving them to tournaments all over the states. As an attorney working in Worcester, MA living in Oxford, those miles were not from his work commute. Perhaps one of his most memorable soccer accomplishment was winning the North American Indoor Championship (Lake Placid) tournament in 1995, an experience he talked about often with a big smile on his face. 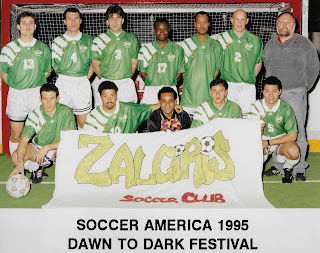 My personal history with Al goes back over 30 years, during which we remained friends. As a teenager, I remember getting injured while playing for a different team, and after my knee surgery, heard nothing from that soccer coach. But Al would call me consistently to check on my progress, well being, at a time when it was important for me to know people did care more about me than just soccer. 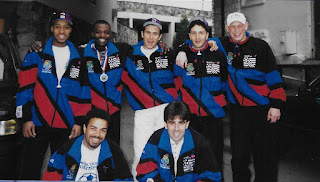 Later on, Al encouraged me to pursue playing soccer for Southern Connecticut State University.  After playing against a college team  at tournament in Oakwood, CT Al mentioned to me, " Southern head coach Ray Reid will be calling you; I gave him your number. Be sure to get back to him!" Trusting his advice and recommendation, not even knowing where 'Southern CT' was, I got back to coach Ray Reid, and the rest is history.

In October 2017, while in the Oxford area, I stopped at this house to say hello. With opened arms, he welcomed me in as he had always done. An hour later we took this selfie, after reflecting on the memories of playing for his teams. 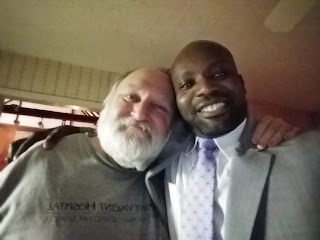 He expressed with great passion how proud he was,  because most of his players turned out to be great people.  The truth is his greatness as a person had such significant impact on our lives, we had no choice but to be decent people.

During my younger years many referred to Al as "my soccer dad", since he drove us everywhere, and I was always part of those teams.  He was definitely an influential person in my life when it mattered most, remained a great friend as I matured into adulthood,  and am very fortunate to have connected with such a "Great Guy".

The most comforting aspect of his sudden passing is the opportunity we have to carry on his legacy through soccer. In 2009, Jason Gaumond and I asked Al if we could use the name 'Zalgiris Soccer' for our soccer clinic,  in his honor to give back to the youth as he had done for so many of us. With tears in his eyes, a great level of humility, he accepted and gave us his blessing.  We're now more committed to make sure his greatness carries on; keep him feeling proud while smiling down at us.

I speak for so many in saying Thank You Al for the rides, the games, the memories, and the greatness you have left us with to remember you by. We are deeply saddened to see you depart from us here.